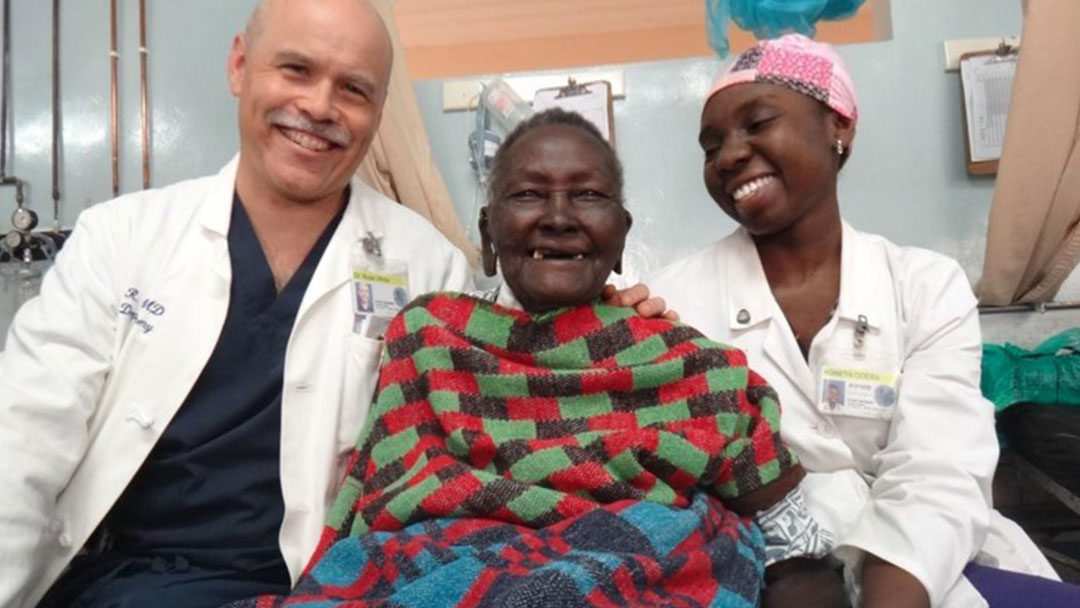 Sofia is a nobody, by the world’s standards. At 75 years of age, with long dangling earlobes from tribal piercing at a young age, now mostly toothless, she looks like hundreds of other old Kipsigis women in southwestern Kenya. But to her large family, she is the “Batiem”—the much loved and respected grandmother. And to all of us, Sofia became a living, breathing lesson about the transforming power of Jesus Christ.

I first saw Sofia in November, 2011, when she was admitted to the Intensive Care Unit at Tenwek Hospital in dramatic fashion. This was actually her second admission to the ICU after suffering a cardiac arrest. I saw this old woman attached to one of the ventilators and inquired of our Kenyan Internal Medicine specialist, Dr. Matilda Ongondi, about the patient’s condition. When I heard that she had just come through our emergency department, having presented in cardiac arrest requiring an extended resuscitation, I questioned the wisdom of utilizing precious resources on a patient who had such a poor chance of survival. Dr. Ongondi shared my concern, but stated that Sofia had already survived one such event, and felt that God had something special still in store for this “Batiem”. It seemed a miracle in itself to see Sofia recover, come off the ventilator, and be discharged to home. Several weeks later, Dr. Ongondi introduced me to Sofia once again in our outpatient clinic. She seemed full of life, but was limited to a wheelchair, since her energy level was very low. I assumed this was likely due to congestive heart failure, or cardiomyopathy which had been the cause of her cardiac arrest. However, Dr. Ongondi informed me that Sofia suffered from a third degree heart block. This means that there is essentially no electrical communication between the upper and lower chambers of Sofia’s heart. As I looked over her ECG, I saw that this was indeed true, and that Sofia’s heart would not increase beyond a rate of 35 beats per minute, despite all medical intervention. This accounted for her significant lack of energy. Her family informed me that she had been very active until she developed this complete heart block. Matilda asked me whether we might be able to find a mechanical pacemaker for Sofia. I once again questioned the use of such an expensive item for an old patient (she looked even older than her 75 years). Again, Matilda impressed me with her belief that God was at work in Sofia’s life, and I told Matilda that I would try. If Sofia could survive until I could locate a pacemaker, I would put it in for her.

By January, 2012, I had obtained a donated pacemaker through the generosity of the Medtronic Corporation. Sofia was scheduled for surgical implantation of the unit on a Friday. However, that day turned out to be incredibly busy with surgical emergencies, and we had to postpone her case. Monday and Tuesday of the next week, the same thing happened, and Sofia and her family were getting discouraged. Finally, late on Wednesday, I purposed that our surgical team would stay late until her case was done. The scrub technician working with me that day, Daniel Ngetich, has been a friend for a long time and is also a pastor of a local church. Daniel had been the one to inform Sofia’s family the day before that once again, we could not get to her case. When I told him who the “late case” would be, he agreed that we needed to stay into the evening to finish. The operation went smoothly enough as we exposed the lower portion of Sofia’s heart through a small incision under her breastbone. Our chief resident in surgery, Dr. Agneta Odera worked with me to stitch the small electrode patch to the slowly beating surface of Sofia’s ventricle. We tested the electrode with an external pacing device, and found that we could achieve a much better heart rate, but that it required a slightly higher voltage than expected. We then disconnected the external pacing device and connected the implantable pacemaker to the wire attached to her heart. To our dismay, we were not able to get electrical “capture” with the implantable battery pack. We assumed this was due to poor connection on the surface of the heart, and so we removed and replaced the electrode on the surface of the heart two additional times. However, it was all to no avail, and we still could not pace her heart. I scrubbed out of the operation and called the company representative in the US. We came to the conclusion that the manufacturer settings were not high enough to capture in this case, and that we would need to get a separate instrument from Nairobi to reprogram the implantable unit. It seemed like the best course of action to complete the implantation of the device, and then try to reprogram it later (which can be done without any further surgical intervention). I went back to the operating room and we created the subcutaneous pocket which would hold the pacemaker generator which until this time had been attached to the heart by a wire, but was sitting on the skin of her chest. Much to our surprise, as soon as we inserted the device into Sofia’s tissue, it began to capture the ventricle, and her heart rate doubled. We were stunned for a moment, until we realized that the pacemaker was most likely not well grounded while sitting on Sofia’s skin. It was not until it was actually implanted within her body that it would function in the life-saving way in which it was intended. All the parts were present and properly assembled, but until it was placed inside Sofia’s body, it wasn’t doing her any good at all.

In the 6th chapter of John, Jesus told his disciples “Most assuredly, I say unto you, unless you eat the flesh of the Son of Man and drink His blood, you have no life you.” Jesus was alluding all the way back to God’s words to Noah, when he said “But you shall not eat flesh with its life, that is, its blood.” (Gen. 9:4). In the mind of the disciples, Jesus was asking them to break one of the oldest commandments—i.e. that they were not to take the life (the blood) of another into them. Now Jesus is instructing them to do exactly that—to take His blood (his life) into them. Do you see what this means? You can have all the necessary parts assembled in the proper way. You can have your Bible held closely to you and even memorize large portions of Scripture. You may have undergone baptism or confirmation or confession or catechism. You may be keeping all the rules, doing all the right things and not doing the wrong things. But until you take the life of Christ within you, all of those other things are as worthless to you as Sofia’s pacemaker was to her sitting upon her chest. There was ample energy within the pacemaker battery to power Sofia’s heart for the rest of her life, but it was doing her no good at all. It is only when you take the life of Christ into your very self that the power of the Gospel can energize your heart and mind in the way that God intended.

Sofia is a nobody like so many other nobodies that we treat every day at Tenwek Hospital. But she is not a nobody. She is a beautiful lesson to all of us. Where is Jesus today? Is He far away? Is He in a church or in a book on your shelf? Perhaps he is as close to you as Sofia’s pacemaker was to her. Will you take the very life of Christ within you today and experience the life-giving, life-sustaining presence of God?