From a Childhood Encounter, Her Destiny was Birthed 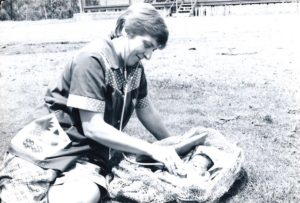 When retired missionary Mary Hermiz was 4 years old, a World Gospel Mission (WGM) missionary nurse came to speak at her father’s church. Myra Martin was dressed in her nurse’s uniform and cap and told stories of her service. Mary realized then that she wanted to be a missionary nurse, and that desire never left her.

After high school, Mary went on to Bible college and then to two nursing schools to attain various nursing degrees before going on to take midwifery. Finally, her dream to be a missionary nurse was realized; Mary signed on to serve in Papua New Guinea (PNG) with Churches of Christ in Christian Union, a sister organization of WGM. From 1974 to 1983, Mary helped run a health center that served 10,000 people and was involved in training new nurses and serving in administration and evangelism in rural PNG.

Near the end of her second term in PNG, while doing her laundry, Mary clearly heard the words, “Mary, your work here is finished,” in her mind. Assuming that this surely wasn’t the Lord, she responded, “Get thee behind me, Satan!” But as time went on, Mary knew in her heart that it was God. After six months of struggle, Mary saw that her time in PNG had come to a close. She returned to the U.S. with a heavy heart.

A few months before returning to the U.S., Mary received a letter from Dr. Ernie Steury, a missionary doctor, asking her to consider coming to Tenwek Hospital in Kenya to assist with starting their nursing school. She didn’t feel inclined to the position at the time but told Dr. Steury she would pray about it.

Not knowing what was next, Mary decided to do what she loved and returned to school to work on a master’s degree in nursing. One morning her devotional reading took her to John 10:27: “My sheep listen to my voice; I know them, and they follow me.” Later that day, when she was driving back from the university, God’s presence filled her car and those words came alive. Immediately she knew that God was saying, “I want you to go to Tenwek.”

“When I’ve been at crossroads, that verse has been a great reminder that I am His sheep and that I’m going to listen and hear His voice, and I don’t need to worry,” Mary said. “I’m going to hear because I’m listening.”

Mary graduated with a Master of Science in Nursing in May 1985 from Indiana University with a doctoral minor in nursing education. (She would later earn a doctorate in adult education from Ball State University in Indiana.) One year later, Mary left for Kenya.

When the nursing school at Tenwek started in 1987, there were many challenges. “In order to have a school of nursing in the hospital, you have to have qualified nurses working in the hospital,” Mary said. “In those early years, we didn’t have that.”

Initially, the nursing school hired national teachers from other schools but soon realized they needed to “grow their own” teachers if they were going to train nurses who reflected their school motto: Caring in Christ’s Name. “Having your own graduates teaching and running the school…those young people with the same hearts for spiritual things I had and seeing them take over—that was certainly a real thrill,” Mary said.

“To see week after week the many patients our students led to the Lord and the encouragement they provided to discouraged Christians was a joy difficult to put into words,” Mary shared. “They were doing what I could never do, since they spoke the language and knew the culture.”

Mary retired in 2012, but since then she has taken multiple trips to PNG and took other nurses with her. PNG still suffers from many preventable illnesses, and Mary hopes to improve the church’s medical clinics’ outreach into the surrounding communities by using Community Health Evangelism strategies.

Over her 38 years as a missionary, Mary learned to wait on God’s timing.

“The basic lesson that we keep learning over and over again in life is He is faithful and He can be trusted,” Mary said. “And yet it seems like in every cycle of our life, we have a tendency to forget how faithful He is. We have to be reminded over and over again that His faithfulness is new every morning, and He will meet our needs.”

We at Mobilizing Medical Missions are honored to work alongside Mary Hermiz. She has been an integral part of the M3 Conference since its inception. She has hosted the conference Nursing Resource Center each year, and created the resource booklet, Mission Opportunities for Nurses.  Stay tuned until next Monday when we will post the video of her Breakout Session from the 2018 M3 Conference.